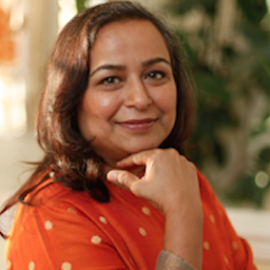 Jasmine SawantVice President, Board of Directors

Recipient of the 2016 Marty Award for Established Literary Arts, Jasmine Sawant is an award-winning alumnus of the post-graduate journalism program of Bhavan’s Rajendra Prasad Institute of Communications, Mumbai. When she lived in Mumbai, she wrote short essays and scripts including a French translation of The Pie and the Tart by Hugh Chesterman. She started writing plays in earnest after she moved to Saudi Arabia, and she continues to hone her writing skills in Canada. She is the Co-Founder and Artistic Co-Director of SAWITRI Theatre Group, which is the recipient of the 2016 Marty Award for Established Theatre Arts. She has written and directed The Kallus Next Door, a socially and culturally relevant piece that was published in Word Fest, Celebrating Ideas and read at the 2014 INSPIRE! Toronto International Book Fair. She has also written and directed Saree Kahaniyan – Saree Stories published in Word Fest, Celebrating Our Journeys. It was performed in Mississauga on many occasions. One World Our World, a dance-theatre piece for young audiences, commissioned in 2009 by Sampradaya Dance Academy, was remounted in 2015. She is a member of the Playwrights Guild of Canada and the Mississauga Writers’ Group. She is also an actor with many theatre and film credits (http://www.imdb.com/name/nm2291348/?ref_=fn_al_nm_1#actress) and the General Manager of Sampradaya Dance Creations.