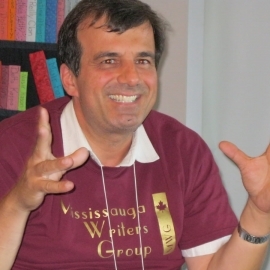 Joseph A. MonachinoMarketing & Promotion, Board of Directors

Joseph A. Monachino is 57 years old, married, and a resident of Mississauga (Ontario, Canada).

He graduated, with Honours, from the Sales and Marketing Certificate program of Sheridan College.  His other hobbies and interests include long distance walking, Classic Rock, reading, watching movies, and of course writing.

He writes a monthly column for the Peel Weekly News called: “Focus on Film Forum”.  It focuses in on current events, personalities and companies that is located in Mississauga, Peel Region, and the GTA.  A radio show, which he will host, is forthcoming on Sauga 960 in the Summer of 2020.  It is called: Film Focus Peel. For the past 2 years, he has served on the Board of Directors of the Mississauga Writers Group  as the Director of Marketing and Communications.